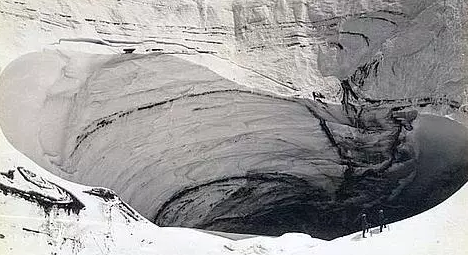 The hole in the Mont Blanc Glacier

When we think of Mont Blanc, we think of excellent climbing, amazing views and incredible snow-capped peaks. But few people know about the dark history of Mont Blanc and the once-thriving towns it destroyed in 1892. After the Mont Blanc Massif released a hidden lake within the Tête Rousse Glacier upon the town of Saint-Gervais and the small hamlet of Bionnay, disaster struck.

Late in the evening on 11 July 1892, the Tête Rousse Glacier released 200,000 cubic meters of water and ice from within a large pocket hidden within the glacier. This water had accumulated water over the years, forming what is now called an “englacial lake.” At the time, however, this phenomena was virtually unheard of.

The timing of the flood contributed to the massive loss of life in the small hamlet of Bionnay and the surrounding area. Having rushed into the town in the dead of night, the townspeople were asleep and unable to escape. Survival wasn’t in the cards for those souls in Bionnay that night.

Tête Rousse Glacier’s flood affected a large area including the towns of Saint Gervais and Le Fayet. And although the bathhouse of Saint Gervais was flooded, most of the damage was done to the town of Bionnay, which was completely destroyed. At the end, where water flowed, all that was left behind was 800,000 cubic meters of sediment.

Among the only records found in Bionnay were school attendance ledgers that noted the children’s last day of attendance.

At the time of the event, only a few people found themselves outside of the danger zone. Glaciologist Joseph Vallot was one of them. In keeping with his duties as the Director of the Mont Blanc Observatory, he was at his post that night.

When day broke, he visited the glacier to find a gaping 40-meter-long cavity where the displaced water had once been. He noted in his accounts that after visiting the glacier, it was evident that part of the glacier’s terminus, or snout, had been torn away.

His estimations noted that 100,000-cubic-meters of water, 100,000 cubic meters of ice, displaced rock and soil and the force of rushing water produced a weight of 500 kilograms that all fell upon the lower-lying towns.

Vallot warned that this would happen again in the future and advocated for explosives to be used to permanently route any accumulation of water away from the villages.

Englacial lakes are known to be very rare but dangerous natural occurrences, with only a few recent studies conducted on their anatomy. One of these was featured in Discovery Channel’s Mont Blanc Mega Flood Disaster special.

Their rarity makes detecting them difficult. Knowing where one is located and whether or not one of its walls will fail, producing a catastrophic flood, is completely unpredictable.

In 1904, the predictions of Joseph Vallot were proved when a second pocket was discovered within the glacier. Authorities drilled a hole into it to release 22-cubic-meters of water. Since then, concern has grown around the site, with a few scientific explorations having been conducted to better understand how englacial lakes are formed, identify them and possibly prevent future catastrophes.

But the threat still remains, even with the recent advancements in discovery. In 2010, the Daily Mail published an article detailing the growing concern of another glacial flood after a subglacial lake pocket was found under Mont Blanc. Up to 65-cubic-meters of water was found in the reservoir, and hikers near Saint-Gervais were diverted away from the area.

This pocket was approached differently. Engineers drilled holes into the top of the glacier and pumped out the retained water.

The pocket was discovered by researchers of the French National Center for Scientific Research (CNRS).

Once, and still, a luxury bathhouse town, Saint-Gervais played host to the rich and famous visiting France. It was a quiet town filled with the air of relaxation. For two hundred years, Saint-Gervais has maintained luxurious thermal spas that, for their hydrotherapeutic waters, became known as rejuvenating centers for health.

Today, the town serves as a gateway to the Chamonix Valley and a staging post for climbing Mont Blanc. The town still boasts its beautiful 19th-century architecture and provides beauty treatments and thermal spas for its visitors.

Bionnay is a small hamlet just outside of Sain-Gervais and was a quiet countryside town filled with a relaxed population. The hamlet was home to the everyday school children, women and men who lived and worked a simple life.

In 1892, Bionnay was completely swept away and almost all of its residents were killed by the englacial flood. Today, Bionnay is home to private luxury Chalets that house adventurous ski tourists and still boasts its beautiful and countryside ambiance.

3 responses to “The Dark History of Mont Blanc”