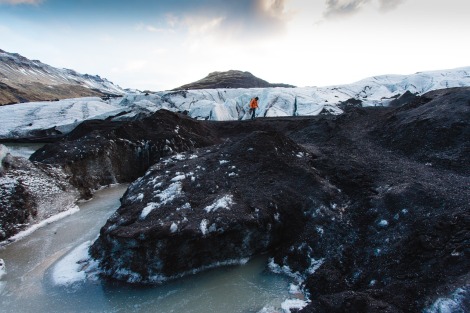 We covered this topic back in 2017, and today, not much has changed. The fact is that climate change is negatively affecting mountaineering everywhere, leaving most climbers wondering what the future of this pastime will look like and if younger generations will ever get to experience it.

In his article, he discusses how the thawing of ice leads water into the crevices of mountainous structures. During the refreeze period, the water turns to ice, expanding the crevices enough to break the rocks surrounding it. However, the ice still keeps these split and cracked rocks in place.

During the proceeding thawing period, the ice melts again and these cracked rocks break loose and fall. Under normal circumstances, this process would be a part of nature that wouldn’t cause alarm. But, climate change throws a wrench in this process.

Each year, the thawing period is longer and hotter. Therefore, the melting of ice spans higher up and deeper into the mountains each year, corroding the surface.

Bit by bit, massive rocks and boulders are chipped away from the surface, and the deeper the water goes, the larger the falling rocks are the following year. This not only creates a geological disaster, but it also creates an unstable climbing environment for mountaineers. Nearby cities also suffer from the massive melting of glaciers.

Mont Blanc Glacier Could Break Off Any Day

Mont Blanc is known for being a dangerous mountain, even for people who aren’t attempting to climb it. In 1892, a massive englacial lake broke free from the Tête Rousse Glacier, releasing 200,000 cubic meters of water and ice onto the lower-lying French towns of Saint Gervais, Le Fayet and Bionnay. The latter was completely destroyed.

In late 2019, a rapid-melting glacier caused a minor panic in the areas nearby the Italian side of Mont Blanc. Glaciologist Fabrizio Troilo, a member of Safe Mountain Foundation, announced that a fast-moving glacier was in danger of breaking off within days.

He reported that a chunk of the Planpincieux Glacier was moving at a pace of 26.6 inches per day and was toting an approximate 953,390 cubic feet of ice. Its speed is twice as fast as that of another chunk of the glacier measuring 8,827,63-cubic-feet.

Planpincieux is located in the Alps on the Grande Jorasses peak, situated on the Mont Blanc massif. This area straddles the borders of France, Switzerland and Italy. According to experts, the rapid movement of the glacier was caused by accelerated ice melt in August and September, which were hotter than usual. This glacier has been monitored by the Safe Mountain Foundation since 2013.

The Intergovernmental Panel on Climate Change noted that global glaciers were losing 220 billion metric tons of ice every year. In a report, the panel concluded that glacial melting is accelerating more than ever before.

Nearby Roads Closed Due to Mont Blanc Glacier Melts

Although no nearby towns required evacuation, the mayor of Courmayeur, Stefano Miserocchi, heeded the warnings of experts and closed a nearby hiking road and banned access to the area, which is located in the Val Ferret.

Environment Minister Sergio Costa stated that this emergency depicts “the necessity and urgency of strong and coordinated action for the climate, to prevent extreme events that risk dramatic consequences.”

In a coordinated effort to bring awareness to the issue, Italian Premier Giuseppe Conte spoke at the U.N. General Assembly in New York and said, “it is an alarm that we cannot be indifferent to.”

In September of 2019, Swedish scientists measured Mount Kebnekaise, the country’s tallest mountain and found that its glacier-covered southern peak is no longer the highest point in Sweden.

As climate change progresses, mountaineers can expect more dangerous conditions while climbing, and the mountainous regions of Europe and the rest of the world will drastically change.