The course was part of Eielson’s Summer Leadership Camp and included a hike.

Cadets were privy to the ways of rappelling down a cliff face and took part in a Prusik Ascent race, which is an organized race to the top of a cliff using a knotted rope attached to a fixed guiding line. 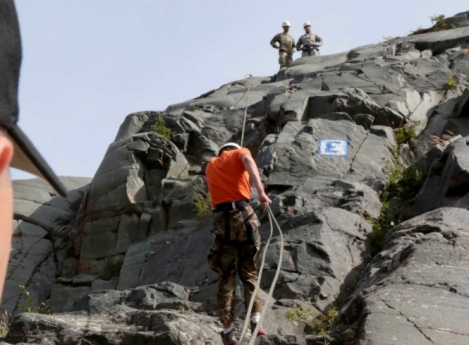 The inclusion of younger audiences and participation in mountaineering has been a rising phenomenon over the past two years, but is something that brings with it the joy for the exposure of such a passionate and powerful sport and controversy when the question of when is too young, “too young?” Although, in this instance, the cadets participating in the course weren’t part of a risky operation.

The host soldiers provided them with a safe environment to learn about team-building, individual strength and goal setting. All cadets were given prime attention to their needs and health; in a state where interaction between civilians and the military is commonplace, this kind of activity was a bright reminder of the positive experiences the military can bring to civilians and vice versa.

We expect to see more of these kinds of camp activities. Mountaineering has shown to be a powerful tool for team building and personal growth. Parks across the country are also including rock walls in their lineup of active gear and companies like Petzl are launching lines of youth mountaineering gear and harnesses.

It’s safe to say that mountaineering can only go up from here, pun intended.

One response to “Eielson JROTC Cadets Take on Mountaineering”

Nepal Closes Mount Everest Amid COVID-19 Concerns - Amid growing concerns regarding COVID-19, Nepal has decided to shut down access to Mount Everest and to the rest of its Himalayan Mountains. As of 13 March 2020, the spring climbing season in Nepal is closed.