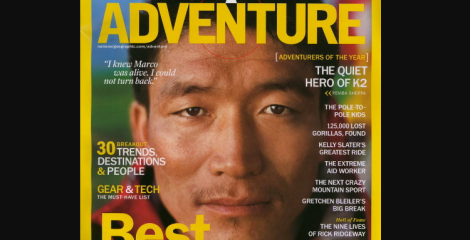 Pemba Gyalje Sherpa is one of the most notable Sherpas of the past 10 years, with 129 total ascents on various mountains. He was awarded the designations of Adventurer of the Year and the Heroism Award, presented by National Geographic in 2009 for his actions during the 2008 K2 Tragedy. His awards also include the Everest National Award, presented by the Nepalese Government, and the Davis A. Sowles Memorial Award, presented by The American Alpine Club.

Gyalje appeared in the documentary film The Summit, alongside Swedish climber Fredrik Sträng and Nordic climber Cecilie Skög, where he recounted the tragic day 11 climbers died on K2 after an avalanche severed the fixed ropes. Gyalje was hailed as a hero for aiding hurt climbers and coordinating rescues the next morning. By the end of the disaster, Gyalje had spent a total of 90 hours in the Death Zone, 70 of which were spent coordinating rescues.

Gyalje lives in Kathmandu, Nepal with his wife and two children.

Born in 1971, Tashi holds the title for the most 8,000 m. peaks climbed, with 30 under his belt. These ascents include 21 summits he has completed on Mount Everest, effectively matching retired Apa Sherpa’s record of 21 ascents of Everest at the time of his retirement. Tashi could usually be found climbing as the head guide for New Zealander Russell Brice.

Tashi is most notably remembered for his appearance in the series Everest: Beyond the Limit presented by Discovery Channel where he is seen berating a climber to continue down by calling him “lazy.” It was a smart tactic by Tashi to get the climber to descend. The climber was tired and he was close to giving up, possibly dying. Thanks to his quick thinking, they both made it down. Watch/rent it here on Amazon Video.

Tashi also appeared at the center of the documentary Sherpa, where he recounts the 2015 Everest Earthquake, after which, he retired.

Born in 1970, Ang Dorje is a legend on Mount Everest and perhaps one of the best Sherpas still climbing today. Ang Dorje has summited Everest a total of 19 times alongside his long-time expedition employer, Adventure Consultants.

Ang Dorje was on contract with Adventure Consultants when it was under the ownership of New Zealand-based mountaineer Rob Hall in 1996. He worked as a Sirdar. That season, Dorje would lose his long-time friend, Rob Hall, in a massive storm that trapped climbers high in the Death Zone. In total, seven others perished during the 1996 Everest Disaster.

Along with Lakpa Tshering Sherpa, Dorje made an attempt to reach Hall, located near the South Summit, only to be forced back by the storm just 100-meters from him.

When the company was bought by Guy Cotter, Dorje remained on contract with Adventure Consultants for various expeditions. To date, he has become a valued member of the team. Dorje has led expeditions on Aconcagua, Rainier, Kilimanjaro and Island Peak.

His feats include his 19 ascents of Everest, 7 summits on Cho Oyu, and summits on Broad Peak, Gasherbrum II and Ama Dablam.

Dorje later married a woman he met in Everest Base Camp South. Afterward, he emigrated to the United States where he works as a wind turbine mechanic in Washington. He continues to climb each year.

Born in 1967, Lakpa Gelu is best known for holding a previous record for the fastest climb of Mount Everest at 10 hours 56 minutes and 46 seconds in 2003. His record ascent was his tenth summit of Everest. This record was later surpassed by Pemba Dorje Sherpa, with an ascent time of 8 hours and 10 minutes in 2004.

Both Gelu and Dorje were locked in a battle for the fastest ascent. Dorje first set the record in 2003, with an ascent time of 12 hours and 45 minutes. Gelu then surpassed it three days later with his ascent, leaving Dorje to break the record in 2004.

Gelu went on to live in Utah where he later founded Adventure Ascents in 2008.

If you enjoyed this article, consider becoming a patron to Base Camp Magazine to help us keep bringing you content like this. Tiers start at just $3.