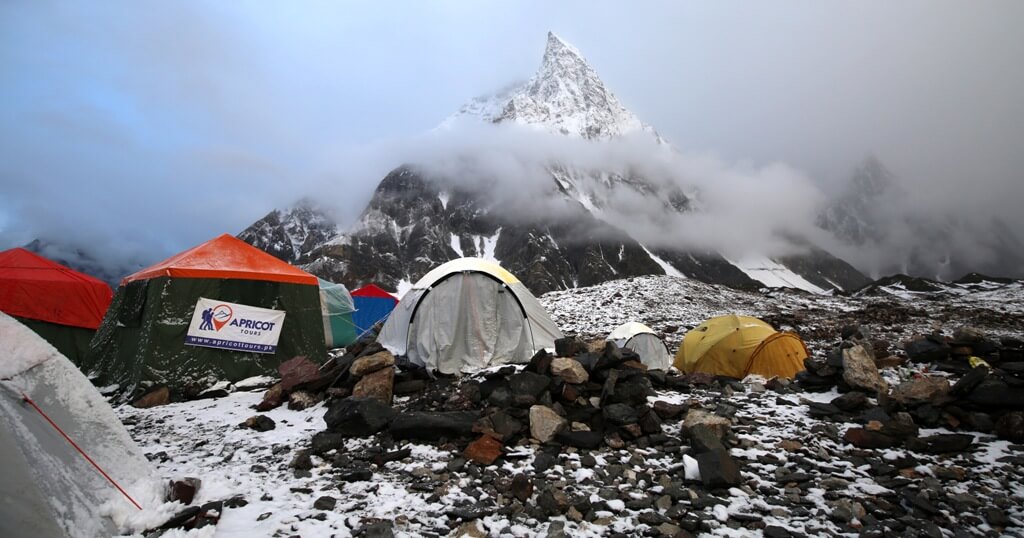 UPDATE: Apricot Tours announced that a helivac was performed, evacuating all 5 members of the expedition. At this time, the expedition is over.

Apricot Tours on the request of team #K2Winter2020 organized a helicopter rescue mission of two helicopters airlifting five members of the expedition. All five members have reached Skardu safe and sound. pic.twitter.com/vY6WfXKcwO

This year, we are following a Nepalese expedition attempting to summit K2 during the winter season. Apricot Tours mounted their expedition recently and reached Skardu on 08 Jan 2020.

K2 is the toughest mountain in the world, often referred to as The King of Mountains. Standing at 28,251 feet (8611 m), this mountain is only second in height to Mount Everest, the highest place on Earth. But in comparison to Everest, K2 is a highly technical climb with many elements that add to its treacherous reputation.

From the violent weather to avalanche events, K2 often does not allow climbers to grace its peak. In the Summer of 2017, we covered the K2 expedition of climber Fredrik Sträng. Sträng was present during the 2008 K2 Disaster and witnessed the harrowing conditions this mountain can hurl at climbers. He did not summit that season and came back almost a decade later for another attempt in 2017. He attempted the climb again in 2018 and 2019, all during summer seasons.

This year, Apricot Tours is attempting a winter summit of K2 consisting of seven climbers and led by Mingma Gyalje Sherpa. They will be climbing the Abruzzi Spur Route. The team members are.

You can donate to their possible record-breaking expedition on the GoFundme page organized by Mingma G.

Stay tuned to the developments on this expedition using the link below.

Born in the northern areas of Pakistan and comprised of a diverse team from young minds to experienced team members, Apricot Tours understands the importance of plans/itineraries that are compatible with international routes for on-the-go travelers. Our experienced staff of porters, drivers, guides and event managers, is the best in realizing and responding to the needs of our guests for customized plans. (Government Licence: ID-2131)

Dispatch #2 From Islamabad to Skardu

Dispatch #3 On the Way to Askole

Dispatch #4 Arrival at K2 Base Camp